Ashleigh has developed a visual, engaging and accessible way to communicate medication information to patients. With the vast number of different medications out there, it became important to create a modular leaflet template that healthcare workers can consistently fill out over time. 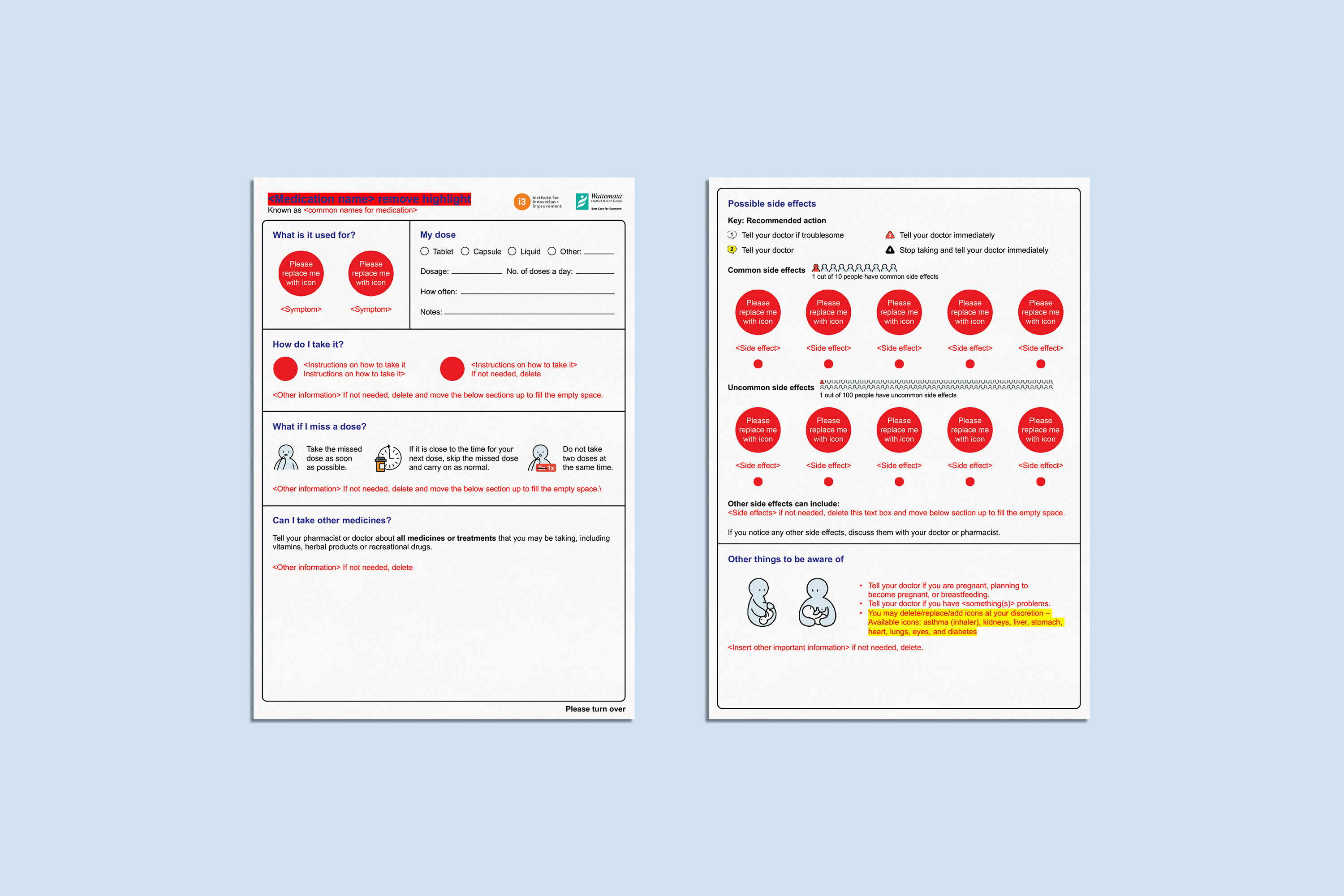 Medication information leaflets are currently very text-heavy with a lack of visuals, making them difficult to digest. The goal of this project is to make medication information more accessible for patients through visual communication. By building upon Jessica’s Metoprolol Medication Information Leaflet from the previous year, Ashleigh was tasked with creating a template for healthcare workers to use that can be applied to a wide range of different medications.

The goal was to make the template as easy as possible to use for non-designers. Therefore, not only did the design need to communicate medication information effectively to patients, but also the user experience for the person using the template needed to be heavily considered. The resulting solution Ashleigh came up with was a modular system. 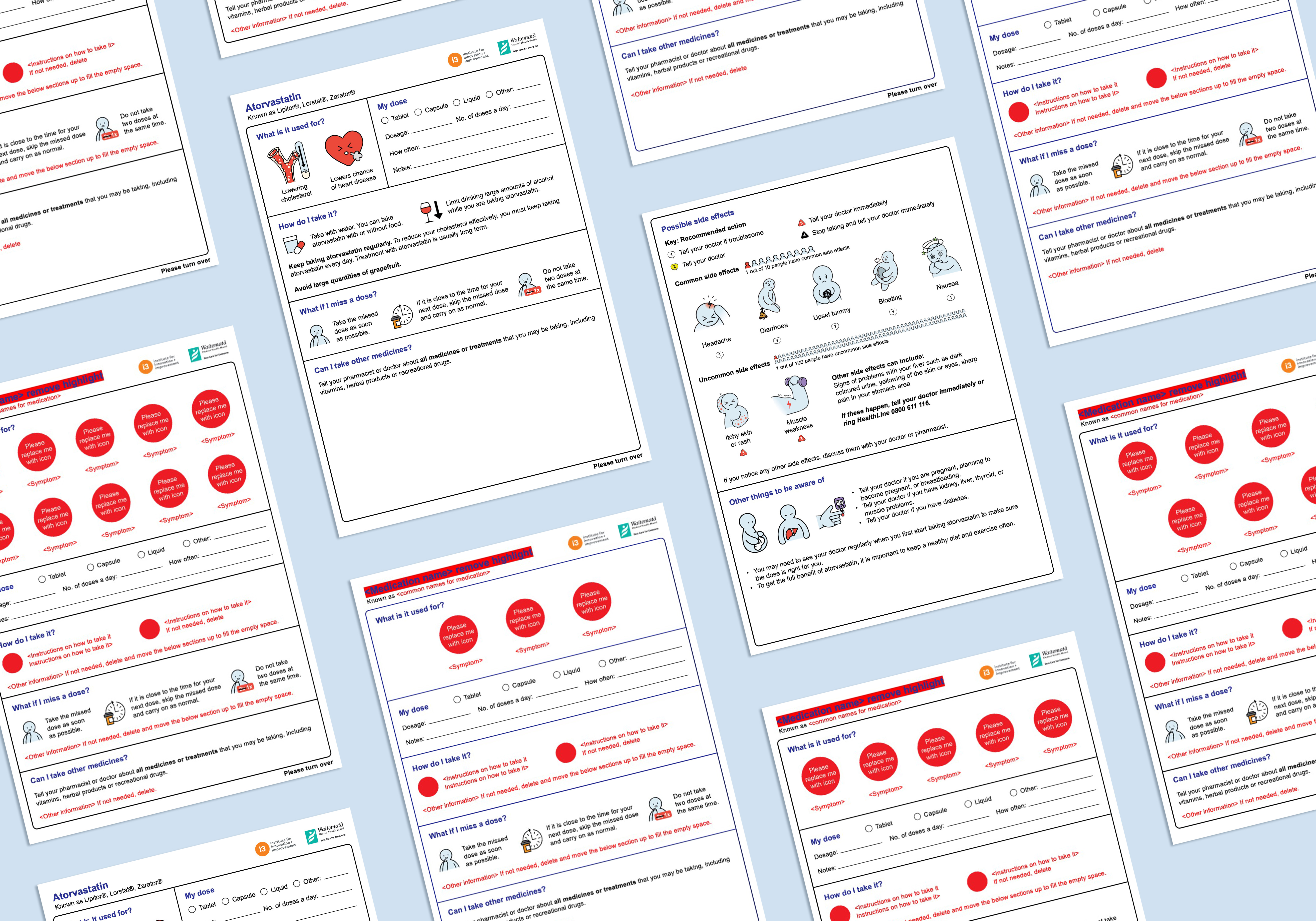 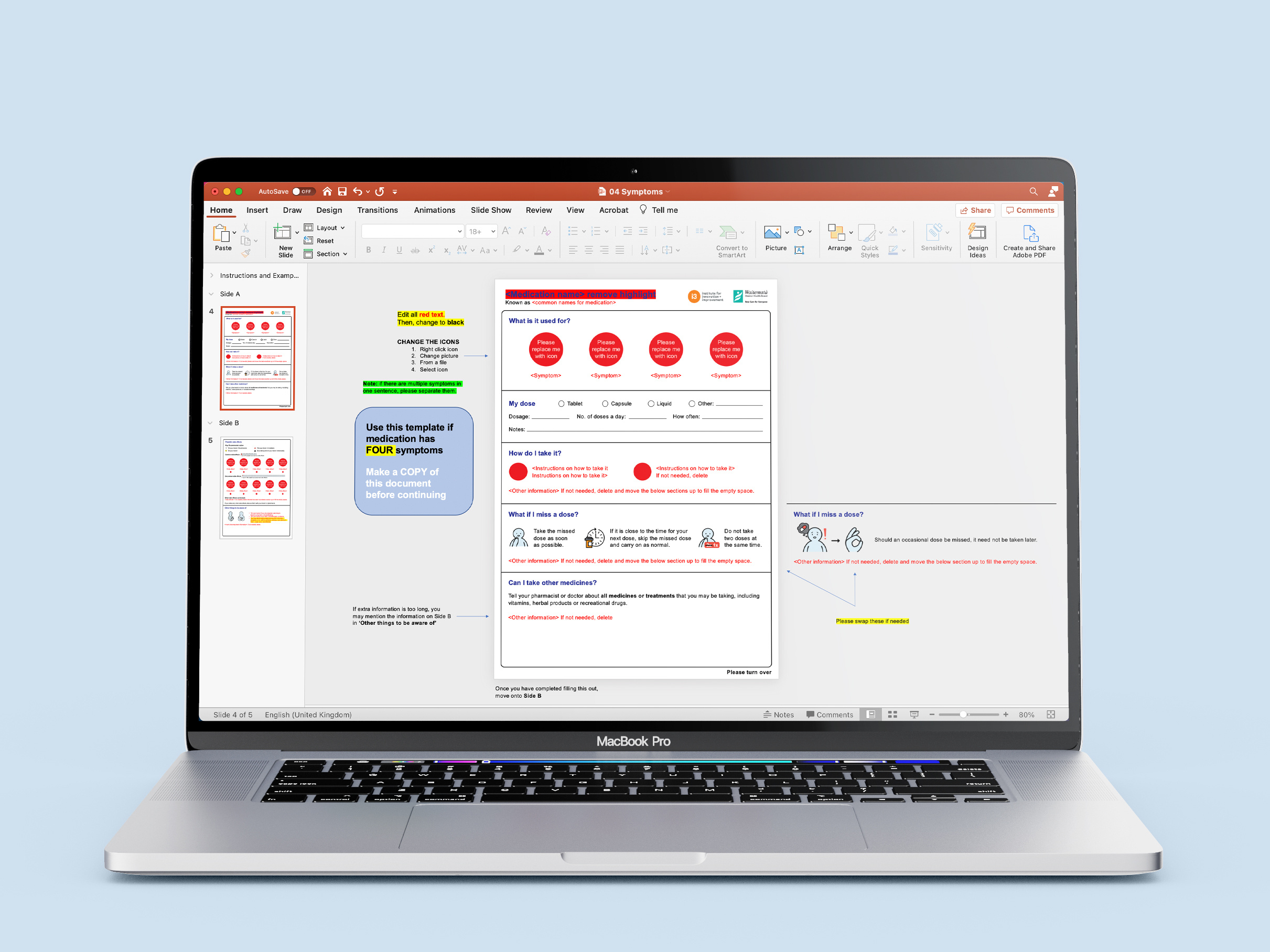 A vertically stacked modular design was created that minimised the shifting of elements and alignment issues that might arise when non-designers use the template. Sections are able to be moved up and down (but not horizontally) for just enough flexibility to accommodate for varying amounts of information across different medications. Furthermore, a total of ten different options of the template were created, each with a different number of symptoms/icons pre laid out, to create a simple “drag-and-drop” system without moving the icons around. Within these templates, the use of red makes it clear to the user that those design elements need to be filled out/changed so that there are no areas of missing information.

It was also vital that the design of the template conveyed information to patients effectively. While the previous Metoprolol leaflet used Lato as its typeface, different specifications arose in this project. It became important that the typeface used was a system font that every computer has while still being professional and having good readability. Ashleigh researched into studies on medication information leaflets and found that Arial at 12pt was the best option. Additionally, she used a navy blue as an accent colour to convey trust and to complement the icons created by Michelle and Sonia. 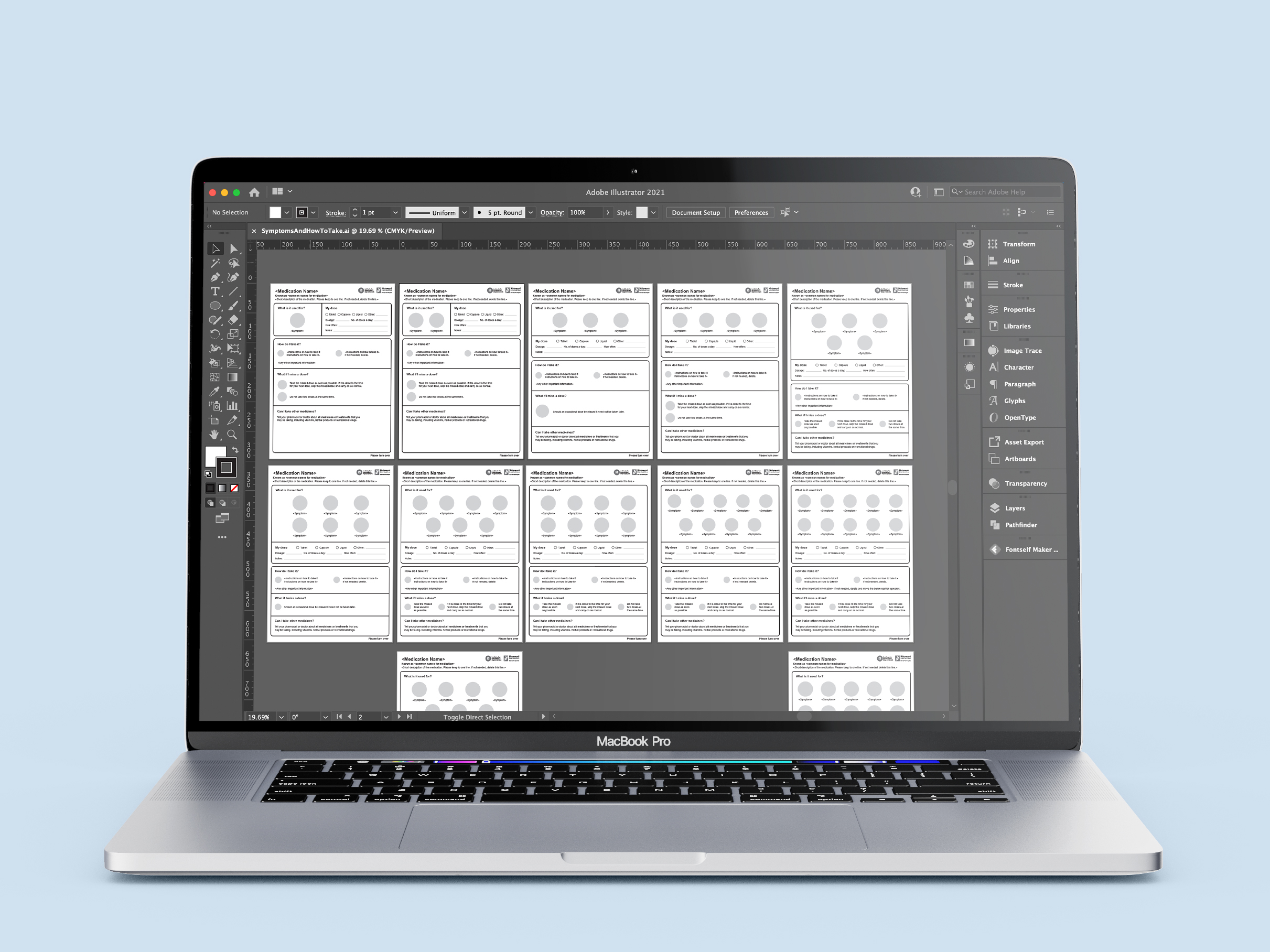 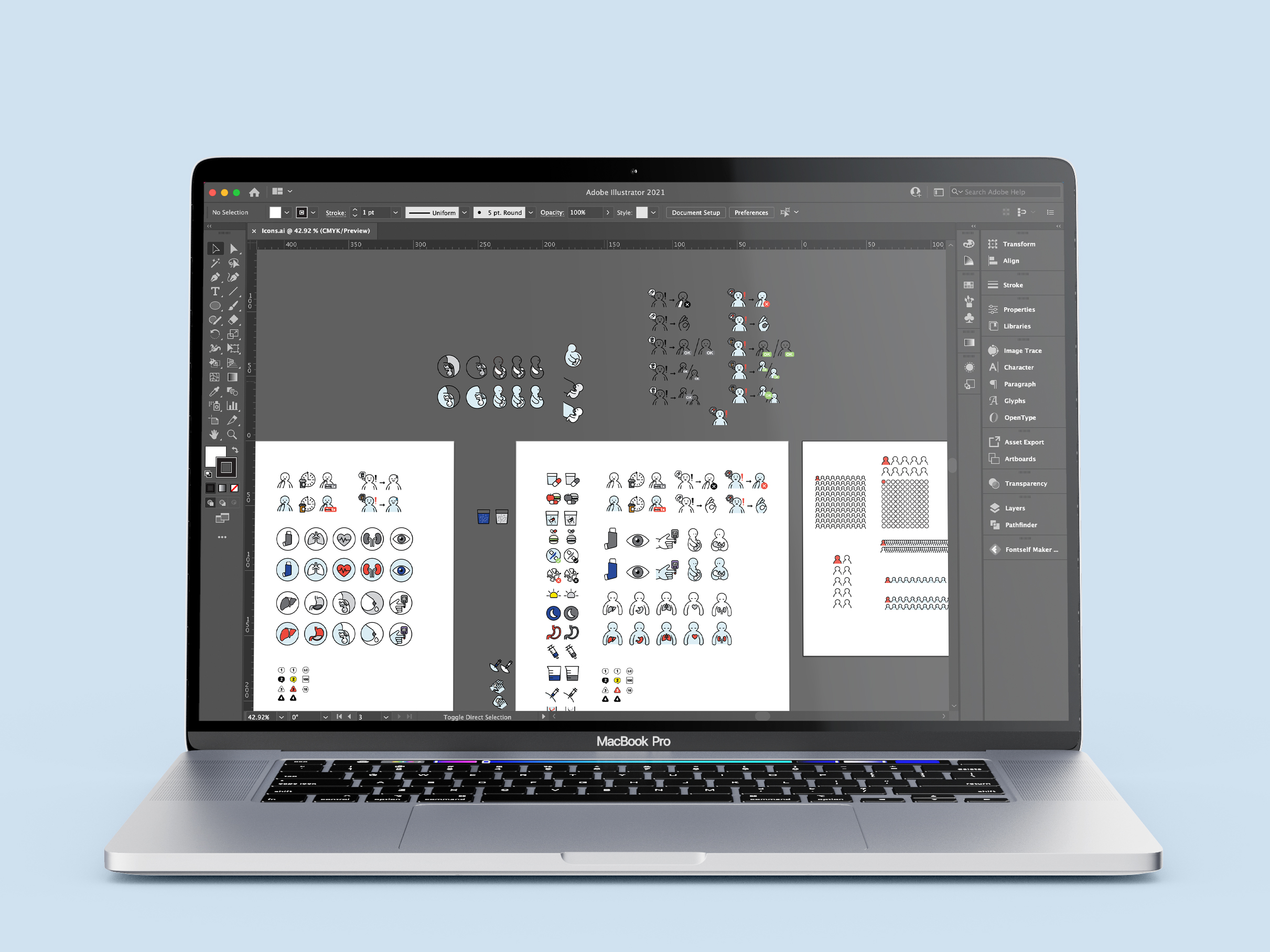 To begin, Ashleigh worked in Illustrator to design the general layouts of the templates. When these were completed, she moved into PowerPoint. This is because non-designers generally don’t have access to the Adobe Creative Suite, so PowerPoint became a good alternative as objects don’t automatically shift like they do in Microsoft Word. Once the first iteration was completed, Ashleigh conducted user-testing sessions with i3 and gained valuable insights into how users would interact with the template. As a result, edits were made to make it clearer and easier to use such as including instructions placed directly beside the slides themselves for a smoother experience.

While Michelle and Sonia created icons for symptoms and side effects, Ashleigh quickly realised that there was a need for icons for other sections of the template. Adopting their style, she researched into many medications and created a bank of icons for: ways to take the medication, missing a dose, other things to be aware of, and small data visualisations. 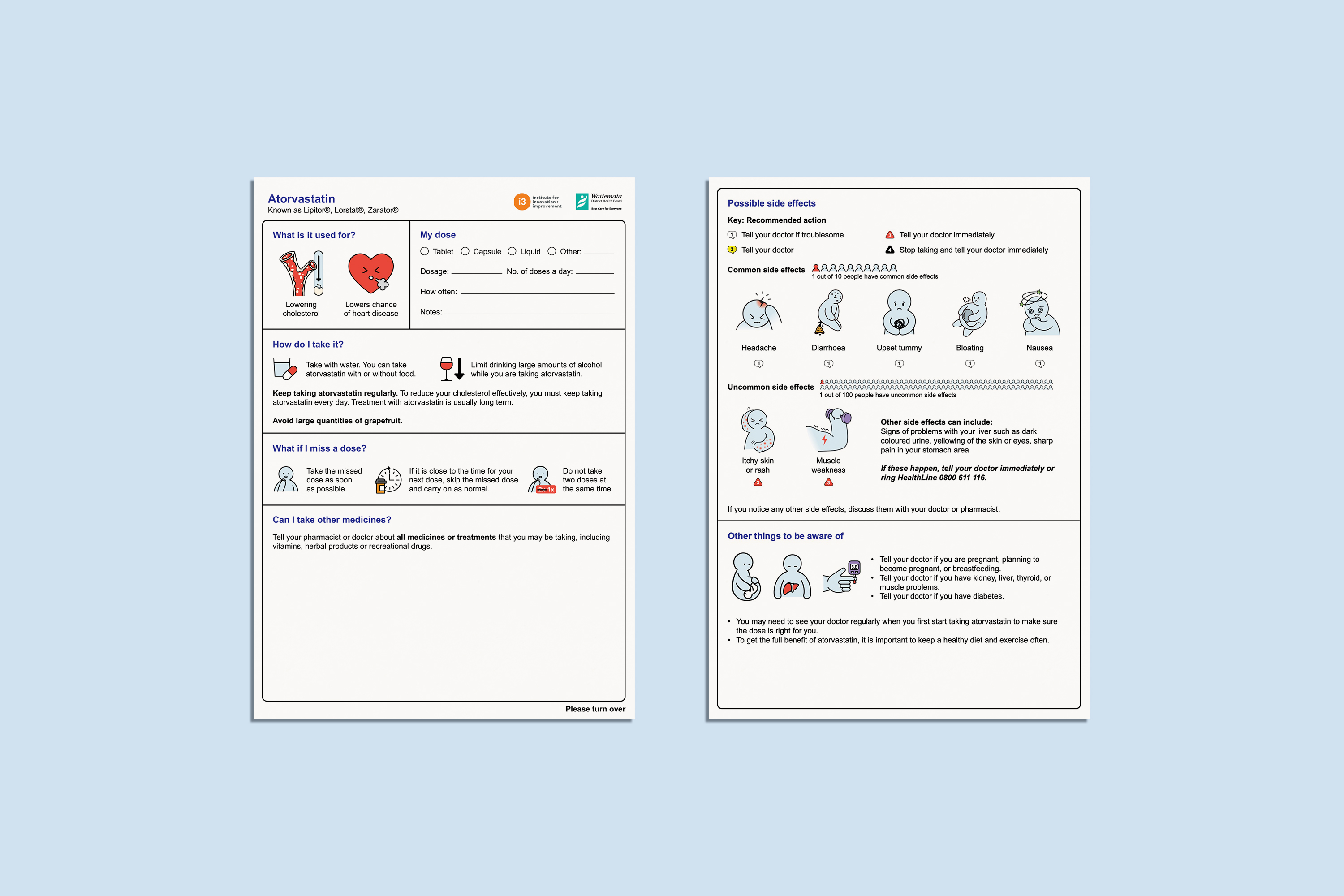 "Working with Good Health Design and the team was a rewarding experience with welcoming and positive people. The project I undertook proved to be challenge as it relied heavily on user experience – something that I lacked experience in. However, it put my design skills to the test and allowed me to put myself in a different mode of thinking. Cassie was extremely helpful as a supervisor, offering valuable ideas, feedback, and critique that helped me progress my design. By working on this real-world project, I was able to gain an insight into the value of design in the healthcare sector and how important it can be." 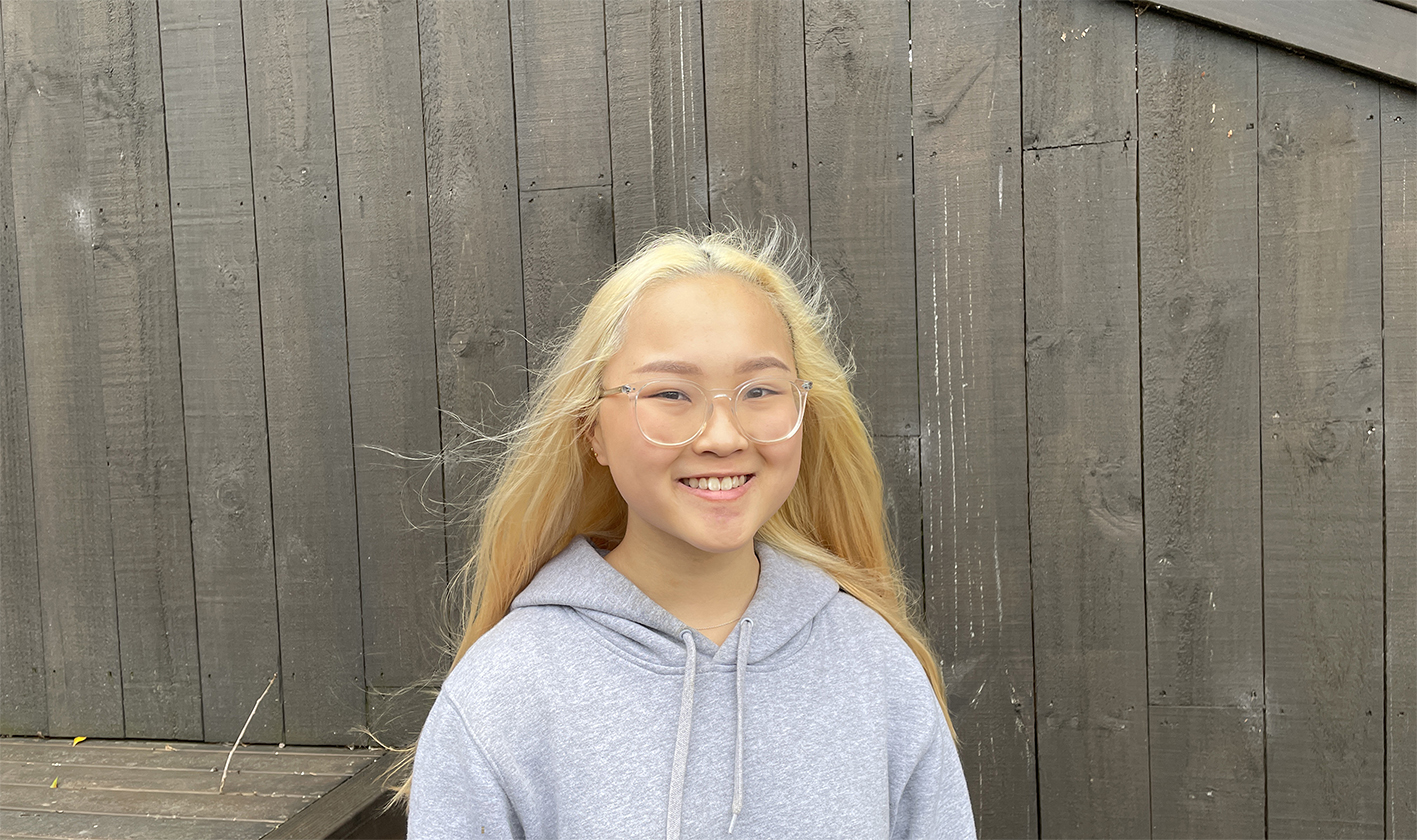